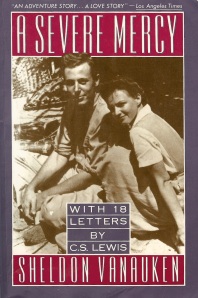 “To believe with certainty, somebody said, one has to begin by doubting.” (p. 83)

“… there is nothing in Christianity which is so repugnant to me as humility – the bent knee.” (p. 91)

“… if we were a species that didn’t normally eat, weren’t designed to eat, would we feel hungry? … Do fish complain of the sea for being wet? … [and] Notice how we are perpetually surprised at Time.  (‘How time flies!  Fancy John being grown up and married!  I can hardly believe it!’)  In heaven’s name, why?  Unless, indeed, there is something in us which is not temporal.” (in a letter from C. S. Lewis to Sheldon Vanauken, p. 93)

Based on these quotes, I’d like to make a few observations.  First, if you’re going to believe that Christ is the Son of God, and therefore the Savior He claims to be, it is no fault to begin by doubting such a phenomenal claim.

Doubting allows a person to begin with a clean sheet, so to speak.  A person that has been raised in the Church, had positive experiences in the Church, and is therefore open to indoctrination from early on, doesn’t wrestle with doubt on the same level as someone who (a) has been raised in the Church and had negative experiences or (b) not been exposed to either positive or negative Church experiences during their childhood and adolescence.  In speaking to those who doubt, I suggest:  that is a good place to start one’s spiritual journey, as did Vanauken.  Why?  Because of the “clean sheet.”  But to be truly clean, one’s “sheet” must have a valuable and necessary ingredient in its makeup or constitution, and that ingredient is HONESTY.  Not openness but honesty.  If it is discovered during one’s investigation of Christianity that there is a prejudice (a pre-judgement) based on anything – peer pressure, education or one’s educators, or the bias of unbelieving parents – and that prejudice is not addressed or challenged in one’s heart and mind, that person is not being honest.

Second, being honest comes from or springs from a general HUMILITY, and that humility is based upon an appreciation that NO ONE knows everything, and that there may be someone or something outside the existential confines of one’s reality and intellect that knows and understands more about the universe of ordered things.  Therefore, true humility must be allowed to and may result in “a bended knee” – acknowledgement that something is true when it would appear to the honest seeker, based upon the life-education-experience limitations mentioned above, that it “should” be false.  Humility requires the honest seeker of truth to allow for things to be true outside “the box” of one’s current thinking.  Again, this basic, this fundamental humility must be allowed to move toward a greater humility – a humility that would require a bended knee.

Third, it seems that if there is a hunger for something (say a belly for food, a fish for water, or the temporal for the metaphysical or, in this case, the sacred or mystical), that longed-for something may exist.  REPEAT:  The humble man will allow that something may be true that was, up ’til now, thought to be improbable, false, or impossible.

I would suggest, humbly, that mankind hungers for God because there is a God.  If one honestly doubts that supposition, help me understand the immaterial part of me – thought, love, joy, sadness, etc. – and why there is this debate about all things spiritual (and in this case, the idea that there is a God)?  How is it that the idea or possibility of God cannot be easily dismissed as some have dismissed the existence of the Easter Bunny, Santa Claus, or flying saucers?