How To Amaze Jesus 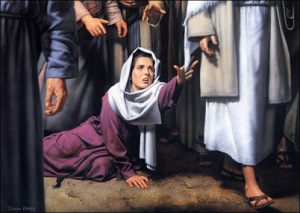 How To Amaze Jesus

I don’t think that it comes as a surprise to us today that people coming in contact with the unique Son of God, Jesus of Nazareth, were amazed by Him.  The miracle worker, healer, and teacher extraordinaire consistently amazed the crowds.  Here’s one example.  In Matthew 7:28-29 you’ll read, “When Jesus had finished saying these things, the crowds were amazed at His teaching, because He taught as one who had authority, and not as their teachers of the law.”

But this is a stunner:  on two occasions the Bible says that Jesus was amazed!  That’s right, Jesus was amazed … as in astonished, astounded, shocked, surprised, flabbergasted, dumbfounded, staggered, and the always brilliant Shakespearian King James version … taken aback!

Have you ever pictured Jesus with a stunned look on His face?  A look that says, “Wow!”

1 Jesus left there and went to His hometown, accompanied by His disciples.  2 When the Sabbath came, He began to teach in the synagogue, and many who heard Him were amazed.

There it is again.  People were amazed … even in His hometown of Nazareth.

“Where did this Man get these things?” they asked.  “What’s this wisdom that has been given Him, that he even does miracles! 3 Isn’t this the carpenter?  Isn’t this Mary’s son and the brother of James, Joseph, Judas and Simon?  Aren’t his sisters here with us?”  And they took offense at him.

4 Jesus said to them, “Only in his hometown, among his relatives and in his own house is a prophet without honor.”  5 He could not do any miracles there, except lay His hands on a few sick people and heal them.   (Matthew 13:58 says, “And He did not do many miracles there because of their lack of faith.”)  6 And He was amazed at their lack of faith.

Jesus was amazed!  He was amazed at their lack of faith.

How you view Jesus will dramatically effect your confidence in Him, your beliefs about God and truth (Jesus claimed God was His Father, and that He – Jesus – was the Truth), and your opinions on miracles and healing (did they, and can they happen in real life?).  Your perspective of the Carpenter of Nazareth will, according to Jesus Himself, determine whether or not you have a soul-saving, life-changing relationship with His Father (John 14:1-14).

The people in Nazareth saw Jesus as ORDINARY!  No one special.  They were familiar with Jesus.  He was just one of the guys.  Just one of Mary’s children.  A carpenter … and the son of an ordinary carpenter.  So …

What do expect from ORDINARY?  What do you expect from a carpenter’s son?  (Furniture … or maybe farm equipment?)

And that’s when our ego responds.  Psychologically … we get offended … and the reason we do is because the peer that rises above us brings awareness to our lack of accomplishment.  Because we’re in the habit of comparing ourselves with ourselves and our peers and our relatives … when someone outdoes us, selfish-humankind that we are – we get offended.

And why do we do that?  Because we’re made to feel small in our own eyes.  The Greek word here for “offended” means “to be repelled because of unmet expectations.”  (The Nazarenes had low expectations of Jesus  – so they were repelled by Jesus’ wisdom, His teaching, and His power to perform miracles!)

Jesus was amazed one other time in His life.  Take a look at this (Luke 7 – third book in the New Testament, seventh chapter):

1 When Jesus had finished saying all this in the hearing of the people, He entered Capernaum.  2 There a centurion’s servant, whom his master valued highly, was sick and about to die.  3 The centurion heard of Jesus and sent some elders of the Jews to Him, asking Him to come and heal His servant.  4 When they came to Jesus, they pleaded earnestly with Him, “This man deserves to have You do this, 5 because he loves our nation and has built our synagogue.”  6 So Jesus went with them.

He was not far from the house when the centurion sent friends to say to Him:  “Lord, don’t trouble Yourself, for I do not deserve to have You come under my roof.  7 That is why I did not even consider myself worthy to come to You.  But say the word, and my servant will be healed.  8 For I myself am a man under authority, with soldiers under me.  I tell this one, ‘Go,’ and he goes; and that one, ‘Come,’ and he comes.  I say to my servant, ‘Do this,’ and he does it.”

9 When Jesus heard this, He was amazed at him, and turning to the crowd following Him, He said, “I tell you, I have not found such great faith even in Israel.”  10 Then the men who had been sent returned to the house and found the servant well.

The Centurion recognized that Jesus had power.  The Nazarenes thought Jesus was ordinary.

The Centurion recognized that Jesus had authority. The Nazarenes thought Jesus was “upity.”

The Centurion recognized that faith in Jesus was the key.  The Nazarenes thought their disbelief was the smart (or safe) position to take.

So … Who do you have more in common with, the Centurion or the Nazarenes?  Are you willing to stand alone, with confidence in Jesus?  Or must you stand with the crowd where it’s safe?  Taken to the extreme:  Is Jesus God in the flesh, the Savior of the World … or was He another insane false messiah?